This is probably my favourite Procol Harum's track, an instrumental piece dominated by Matthew Fisher's Hammond and Robin Trower's electric guitar. The delicious central piano interlude is also an excellent idea an the majestic pace of the song is simply stunning. No other tracks in 1967 were as prog as this one, no other tracks anticipated so many features of our genre, and after all just a few other bands played such an important role in building up a musical era. 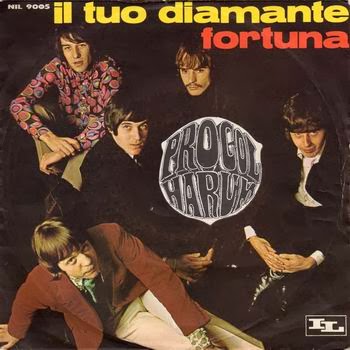 Procol Harum released this 7" single for the Italian market,
including "Il tuo diamante" (an Italian version of "Shine on Brightly")
and - as a B side - "Repent Walpurgis" renamed "Fortuna".


Gary Brooker & friends succeeded in mixing up classical themes, pop-rock riffs and a pinch of folk. This track is still fresh today, but we should never forget how new and bold it was in 1967 and I'll never forget to thank Procol Harum for this. Ah, by the way, Walpurgis was a VIIIth Century British female missionary whose celebration day once coincided with the Witches' annual rendezvous with the devil.
Pubblicato da Domenico D'Alessandro a 21:53