This famous Concerto was the best way to musically end up the Sixties when released back in December 1969. Deep Purple (and especially their late keyboardist, Jon Lord) concurred in their own way to the proto-prog era and this live recording is an essential part of those seething, hectic years. It's a very long suite in the shape of a classical concerto, divided into three movements: 1. Moderato - Allegro, 2. Andante, 3. Vivace - Presto. Entirely composed by Jon Lord, it starts (First Movement) with a sharp fight between the Royal Philarmonic Orchestra and the band, each of them playing the same tunes and trying to overcome their musical "opponent". 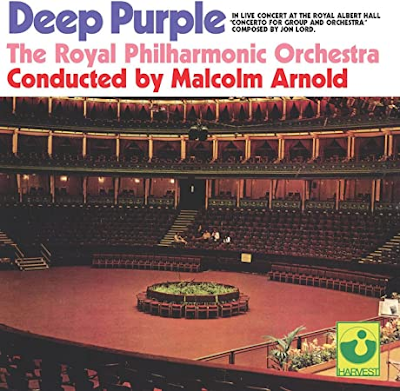 The concert at the Royal Albert Hall took place on September  24th.

The second Movement moves to more peaceful quarters and we can also appreciate Ian Gillian's voice and lyrics laid on a beautiful ballad theme. Here the orchestra and the group begin to merge, but it's only in the final and shortest Movement that all barriers fall down and the two ensembles act as one, building up a lively and even frenzied finale. Well known as it is, this ambitious, challenging and everchanging piece of music, maybe ahead of its time, is surely worth another go on our playlist.