Hands are an American band with two dfferent lives. Founded in the mid-seventies, they released an amateur album that was not successful, so that Hands - after an intense touring season - disbanded and were almost forgotten. The re-release of their album in 1996 changed somewhat their destiny and a renewed interest among the progfans community brought these musicians to revive Hands with a slightly different line up and to release some new albums. 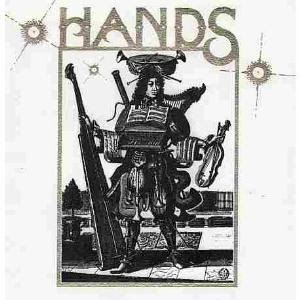 The 1996 reissue of Hand's debut album plus early songs.

This track, however, is the instrumental opener of their reissued early works and features some of the band's highlights: a lively folk rock taste, a recognizable Jethro Tull and Kansas influence, a creative use of many acoustic and electric instruments and - last but not least - an uncommon ironic side. Even if their original production wasn't perfect, the re-release of this track (and of the album, together with more early materials) souds pretty good and brings back to our ears all the colours of its era.
Pubblicato da Domenico D'Alessandro a 11:25 No comments: