Le Orme wrote several song about the so-called Flower Power era and this one, taken from "Verità Nascoste", was also a successful single in the Italian charts. Mixing gypsy habits, Hippy Nation and a vague social engagement, this very original song is about a girl who decided to quit her wealthy family to join a nomadic group. 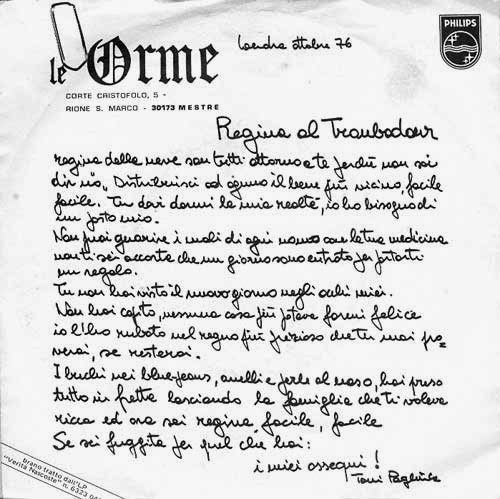 The single cover featured the handwritten lyrics of the song.

That said, the main interest of "Regina al Troubadour" dwells in its music and in its strange musical architecture. The delicate sung line aternates with a series of instrumental interludes representing many faces of the '70s music scene: prog, pop, folk, funky, classical revival, space... they're all there, like in a colourful exhibition. And the Troubadours' Queen still smiles with her robes and her rings, the icon of an era.
Pubblicato da Domenico D'Alessandro a 19:00