Todd Rundgren is a highly underrated composer, IMHO. His eclectic approach to music surely didn't help him, but allowed his songs to keep their charm intact during many decades. This track - a virtual three movements suite - is the most known piece de resistance of Utopia, the band Rundgren founded in 1973 to empower a pop oriented solo career he had begun in 1970. However essential for the band's history, "Utopia" (also known as "Utopia Theme") was never recorded in studio and its live version - at the Fox Theater in Atlant, November 8th 1973 - filled the first side of Utopia's debut album. 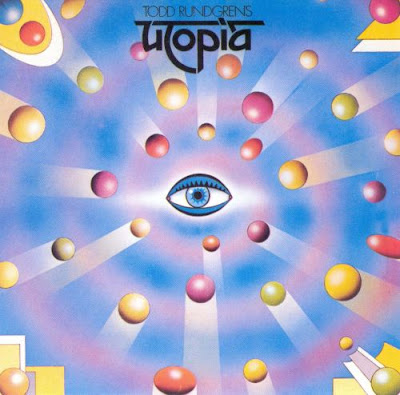 As I said before, we can (very) roughly divide this epic into three parts, the first one offering a highly dynamic jazzy prog, the second one exploring the operatic and pompous side of pop-rock with a beautiful, catching sung theme and finally the third one stromgly rooted into the symphonic rock ground. Manifold and unpredictable as it it, "Utopia" still is a coherent piece of music, as if the same scene was described from three different points of view. I know many critics dislike this track and label it as pretentious and showy, but I hope you'll forgive me if I say I'm always moved by it. And all in all, this is why I like prog.