"On n'a pas fini d'avoir tout vu" (something like "We're still going to be surprised" in English) is a colourful album in the wake of the psych and proto-prog bands of the early '70s. But Triode also had a strong jazzy and bluesy soul, so that the final mix is a very original one, as this opening track proves well. It's an instrumental based on the rythm section and the flute and exploiting a simple and effective  bass guitar arpeggio on which Michel Edelin plays his flute on both the angelic and devilish tones. 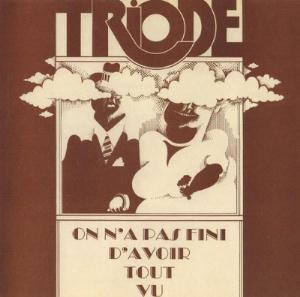 Luckily, Mellow Records released a CD version of this album.

"Magic Flower" is a perfect example of what a good band can do when creating free variations and apparent improvisations on a well performed rythmic idea. Especially when they also know how to add on some good and nostalgic moments. Unfortunately, this foursome Parisian group disbanded soon after their debut studio work. But of course, their music's still alive.
Pubblicato da Domenico D'Alessandro a 12:23