Another great classic enters my humble collection. This is from "The Lamb Lies down on Broadway", the double LP released in 1974, the last Genesis' album with Peter Gabriel. I adopt here the title as stated on the album booklet and on the 7" single, but you'll find Carpet Crawlers in the back cover of "The Lamb" and The Carpet Crawl on "Seconds out" live album. Be as it may, it's a slow, intense song, with a sad and obscure atmosphere but also featuring one of the deepest Peter's vocal performances. His voice slowly rises the musical scale and grows up both in volume and feeling. The group provide a suspended atmosphere where Mike Rutherford's bass lines add an uneasy touch. 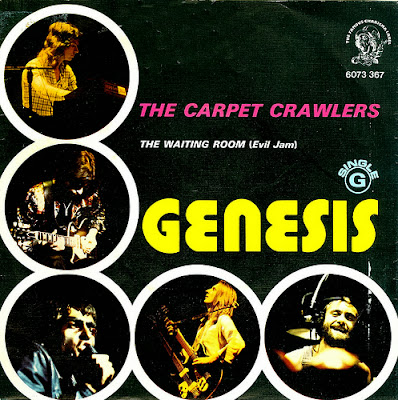 Released in April 1975, this was the last Gabriel's single with the band.


It's one of those tracks you listen to without noticing the time passing by and the first time I put this on my stereo I was sure it lasted some 3 minutes or so. I was really surprised when I read the actual duration of 5 minutes and more. I also like Phil Collins' vocals on the "Seconds out" live version, but I have mixed feelings about the 1999 single studio remake. I'll let you decide.
Pubblicato da Domenico D'Alessandro a 16:14