Coming from "El Patio", the first and maybe best known album by Triana, this track is simply stunning, with Jesus de la Rosa's warm voice, spanish guitars, fully progressive keyboards and all the classic features of the so called "Flamenco rock". You'll also find here some acid sounds and a splendid specimen of cante jondo, the deepest and most charming genre of Flamenco. 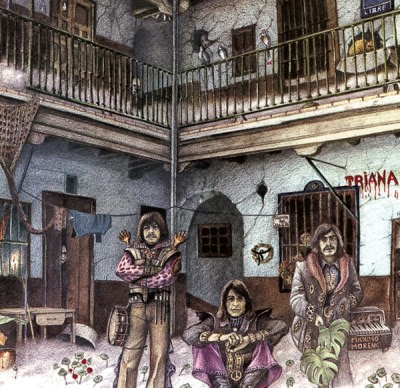 "El Patio" is one of the greatest albums I've ever listened to.
As usual with Triana, you can't really tell the Spanish folk influence from the Progressive rock taste: they created a new standard, often imitated and never overdone. The dramatic atmosphere of this track is further emphasized by the electric guitar, provided by guest Antonio Perez, another welcome and winning point. Last but not least, the tempo changes add a synphonic pace to the song... isn't it enough?
Pubblicato da Domenico D'Alessandro a 10:55