One of the most influential prog songs ever, no doubt. Even if I better like the pastoral side of the first KC album, I can't denie this is creative rock music at its height. The main riff is simply stunning and I consider it as the bridge joining the psychedelic and the synphonic banks of the late 60s rock 'n' roll. The chaotic appearance of the track fades away with a more careful listening and reveals a well structured architecture and an original melody. 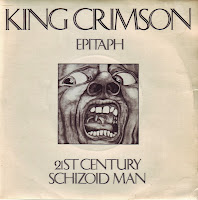 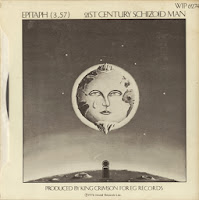 
More than this, this song is a strong, raging attack against the alienating world of the modern era and especially against war, a theme you'll also find elsewhere in the album. Sure, the track isn't for the faint of heart, with its abrupt changes, distorted sounds and jazzy cameos... it's an adventurous song, full of musical details and each time one listens to this it's like listening to a new song. The magic of prog, I suppose.
Pubblicato da Domenico D'Alessandro a 10:06