Here's a short and beautiful instrumental track by the Swedish  multi-instrumentalist Bo Hansson, who unfortunately left us in 2010. The original album "Sagan om Ringen" was released in Sweden in 1970, while Charisma Records published it worldwide as "Lord of The Rings" in 1972. This is the intro of the album, one of the many ones dedicated to Tolkien's books, and I like it very much. 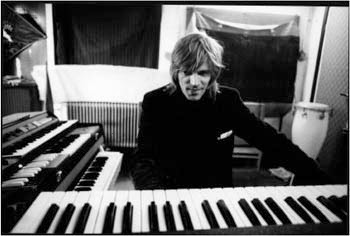 Bo Hansson and his beloved keyboards.
It's a fluid, almost liquid melody driven by keys and flowing on a slightly Oriental rhythmic background. A few notes giving a sweet but unusual feeling and perfecly describing the Middle Earth and the special mood we all experience when leaving for a long journey. The English title of this song is in fact "Leaving Shire" (but the actual meaning of "Första vandringen" is "The First Journey") and I find in it the distant lights of a new horizon at the end of the road.
Pubblicato da Domenico D'Alessandro a 09:12