Each tyime I listen to "Afterwards" I wonder how on Earth VDGG could write and perform such a deep song in their debut album. Well, luckily they could. It's a 5 minute jewel track, based on keyboards, clever drumming and the sensitive Peter Hammill's vocals. The dark atmosphere is somehow softened by a pleasant melody and a relaxing tempo, while the electric piano / Hammond organ plots and the wah-wah guitar add some a peculiar (and psychedelic) stress to the song. 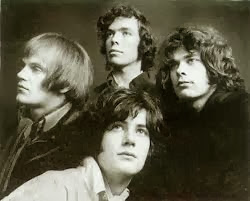 
Even if the album "The Aerosol Grey Machine" was originally planned as a Hammill's solo work, the band here acts like a band should, interacting and improving each other's contribution. "Afterwards" is a prog ballad, one of the rare specimens of "traditional" song structure in VDGG's discography, but nothing is really traditional, when it come to Hammill & friends.
Pubblicato da Domenico D'Alessandro a 09:24