Illusions on A Double Dimple (Triumvirat, 1974)

This long suite (6 parts and more than 23 minutes) is the title track of 1974 Triumvirat's album, probably the best one in this German act's career, recorded during 1973. This track a well written and melodic epic, including effective themes and a wide range of pleasant arrangements, so that you're surprised to know they were just a trio then. If elsewhere the band used to go too far with special effects and magniloquent keys, here they created a well balanced architecture, standing on solid compositions. Starting with Flashback, a delicate piano & voice intro, the suite goes on with Schooldays, a section including a very good keyboard work and another nice vocal theme. 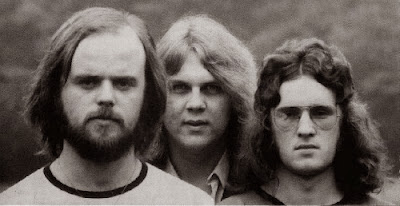 Triumvirat were a bass-drums-keyboards trio in 1974.


Triangle is an instrumental, vaguely jazz-oriented part, where Fritz proves his skills on keyboards, supported by the rythm section. Then comes the short Illusions, featuring a tight vocal performance, followed by a faster section called Dimplicity, reminiscent of late '60s pop-rock... it could be a Kinks' song! Last Dance is the final section, debuting with a wild piano, then featuring all the keys you can hope for. Here, some ruthm & voice arrangements à la Yes announce the final acceleration. A very good example of traditional progressive rock with a welcome theatrical scent.
Pubblicato da Domenico D'Alessandro a 12:47