For sure, this is an electronic music track of prog interest. Not only its structure is complex and carefully articulated, but the two different parts form a 12 minute coherent suite reminiscent of a synphonic two-parts composition, not so far from many romantic opera preludes. This instrumental track is inspired by the comet Kohoutek, discovered in 1973 and rapidly becoming an event during 1974. In fact, a 1973 early demo-quality single of Kometenmelodie part 2 was actually titled Kohoutek-Kometenmelodie, while an edited version of Kometenmelodie part 2 was released as a single immediatly after the album release. 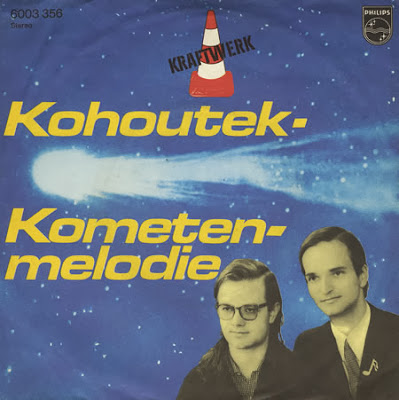 The cover of the early version of Kometenmelodie, released in 1973.


The first part of the song describes the long, dark, silent journey of the comet through the far and cold regions of the Solar System and the mood here is morn and arcane, on a very slow and almost lugubrious tempo. Then, part 2 introduces the brighter and spectacular passage near the Sunk, with a tempo acceleration and a melodic, pyrotechnical variation of the main theme. Prog or not, this is great.
Pubblicato da Domenico D'Alessandro a 09:33