Yes, the Moon rules here: the Moonman, the band called Moongarden and even the album this track comes from, that's titled "Moonsadness". That said, this is a very good suite also when the sun shines, divided into eight parts and displaying both traditional prog and new ideas. The main mood is calm and pensive, but not necessarily sad, as the title would suggest. Cristiano Roversi is one of the best known Italian keyboardlords (and he's also responsible for both the music and the lyrics of this epic), so there's a wide range of keys in this track, as you can easily guess, including vintage and modern sounds. 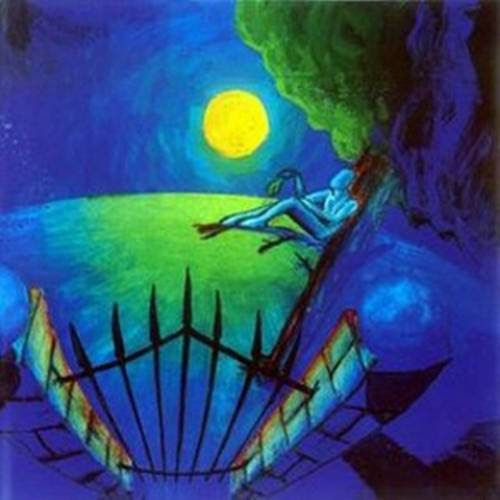 "Moonsadness" was the band's debut album and the cover art
was inspired by the suite's lyrics teeling a rather strange love story.
But all the musicians are great and you'll find here devilish bass lines, dreamy guitar solos by David Cremoni, the other hardcore member of the band, jazzy drumming, an excellent flute work and - last but not least - a passionate and pleasant voice. I especially appreciate the band's three-sided kind of prog: the melodic sections, the jazzy improvisations and the heavier rock moments. It's an always changing musical landscape I don't always find in Italian bands from the '90s and the 2000s. And this is, of course, one of the best reasons why I'm recommending "The Girl And The Moonman" to your kind attention.
Pubblicato da Domenico D'Alessandro a 17:23