Prog? Space? Ambient? Post-rock avant la lettre? Ozric Tentacles have a genre of their own, or maybe morer than one. Each Ozric's song is a world apart and I introduce here the title track of one of their most known albums, "Erpland", released in 1990. If this one isn't prog, it is certainly something akin. It's a beautiful rock song, with a well found recurring guitar riff and kind of a wall of sound throughout the track. 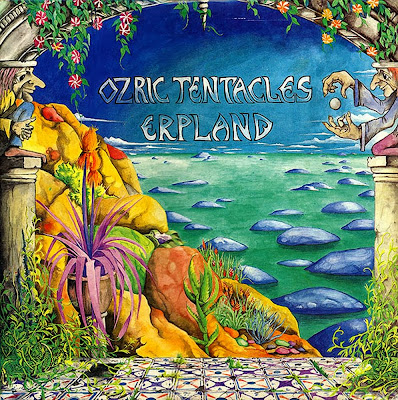 In this album cover appears for the first time Erp (right),
the character that would become one of the group's trademarks.

Moreover, rythms and the themes change and cross themselves, building up an original and rather intricate plot. But energy is the winning point. There's a mighty and joyful spirit in "Erpland", a colourful push reminding me some '70s West Coast band or an early '80s British Art-rock group. Be as it may, those English boys once again prove themself an eclectic and highly creative act, one of the last European cult bands.
Pubblicato da Domenico D'Alessandro a 11:50