The Freng band Magma are rightly considered as the weirdest and most stimulating act of their generation and this 15 minute Köhntarkösz first installment definitely proves it. As most of their discography, this is part of a big picture about planet Kobaïa and their inhabitants' strange habits. Written by the band's drummer and leader Christian Vander, this track is sung in Kobaïan language, such as invented by Vander himself. 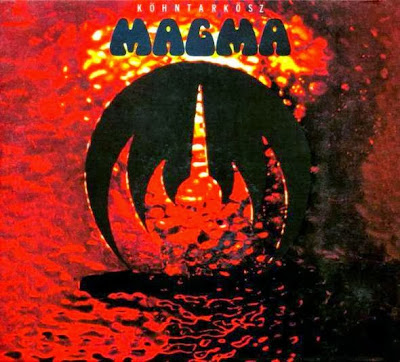 
The subtitle of the song explains this is the musical description of the ritual  access to the local hero Ëmëhntëhtt-Ré's tomb. We can roughly divide this epic into three sections: the first one is a slow and liturgical, mostly choral and arcane, the second one slightly moves towards a jazzy and rhythmic mood, while the last part combines the features of the previous ones with an extra martial accent. The whole track is ruled by Christian Vander's creative, unusual drumming, but all the band members contribute to the final effect.
Pubblicato da Domenico D'Alessandro a 16:03