Like it or not, this is a remarkable song in many ways. First of all, it's a keenly arranged song, based on Tony Levin's Chapman Stick and including the famous trumpeting elephant effect on Fripp's guitar on which the song was titled. It's an impressive (and mainly electronic) display of wall of sound, filled with pulsing energy and irregular rythms.The sung parts are almost yelled, adding more confusion to the puzzling big picture. 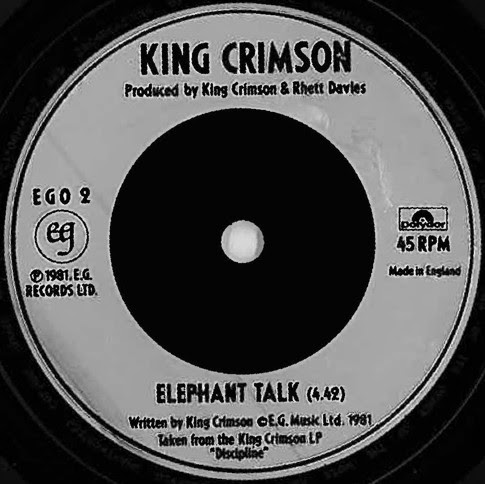 This song was also released as a 7" single b/w "Matte Kudasai".
A 12" single also exist including a third track, "Thela Hun Ginjeet".
The lyrics are actually relevant, being a collection of words naming linguistic interactions. Those are in alphabetical order, so that the first stanza only includes words beginning by A and so on until the fifth and final stanza, displaying words by E, like Elephant. The lyrics and the music both point up the redundacy and superficiality of verbal communication. Talk, talk, talk, it's only talk!
Pubblicato da Domenico D'Alessandro a 10:56