Here's another of the major classic tracks from the golden era of Italian progressive rock. Not only that: "La carrozza di Hans", taken from the first PFM's album "Storia di un minuto" (1972), but composed, recorded as a single (along with "Impressioni di Settembre) and publicly performed in 1971, some months before the LP release, is also one of the first acoustic guitar driven songs in its period. That's why guitarist Franco Mussida is the main character of this book of wonders, also including Mauro Pagani's melancholic violin and adorned flute, an icredible choice of keys by Flavio Premoli and, of course, all the typical rock paraphernalia provided by Franz Di Cioccio and Giorgio Piazza. 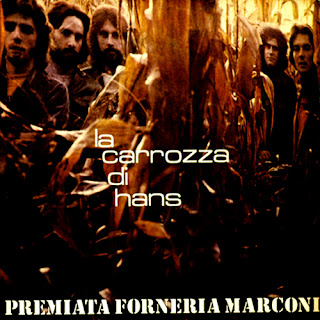 This song was the first PFM's release in 1971 as a 7" single,
featuring "Impressioni di Settembre" as A-side.


The strange vocal intro, midway between sung and recited, immediately marks the originality of a composition featuring quasi-medieval slow passages and more rythmic sections, all separated by dramatic changes. This song is a brilliant example of the early Premiata charming sound, so different from anything else the music fans of the '70s had listen before and yet so perfectlty in tune with its time. Pure magic, I daresay.
Pubblicato da Domenico D'Alessandro a 16:19