I'm not particularly fond of exprerimantal music, because of my deep ignorance, I suppose. But I still can feel magic in music, when I listen to it. This is exactly the case with "Hosianna-Mantra", the suite taking up the A side of Popol Vuh's album of the same title. This was in 1972, when Florian Fricke decided to abandon electronic instruments in order to fully convey his spiritual and rarefied idea of music. He certainly did well and this three part suite is a living proof of that. The first section, simply titled "Ah!" (like an oriental mantra, but also a surprised interjection) introduces the acoustic instruments, especially Fricke's piano and Robert Eliscu's oboe, plus Klaus Wiese's Indian traditional tanpura,providing the background tapestry of the whole composition. 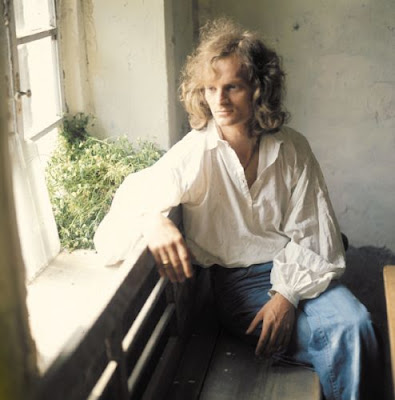 A beautiful picture of Florian Fricke.
He left the material world in 2001, his music never belonged to it.


We're gently carried away, in an immaterial dimension and when the music fades away, we're ready for the second, inner section, called "Kyrie". This is also rarefied and elevated, but the beautiful voice of Djong Yun, repeating Kyrie eleison (Lord have mercy, in ancient Greek) like a mantra adds a human and moving touch, melting in a thrilling way Christian and Hindu traditions. The electric guitar, played by Conny Veit of Amon Düül II fame, alternates with oboe, piano and tampura This goes on in the third and longer part, "Hosianna-Mantra". Fricke put aside the soprano voice, singing a Hosianna prayer on a  beautiful melody, the oboe and an more present psychedelic electric guitar. When the last gentle notes arrive, I always feel like waking up from a pleasant dream.
Pubblicato da Domenico D'Alessandro a 09:44