When it comes to folk / rock / classical cohabitation, Jethro Tull deserve our greatest respect and our highest gratitude. "Minstrel in The Gallery", for example, is a well mixed and even better set up specimen of crossover song, starting like a Tudor era piece of music - including minstrels and dance room galleries - then going heavy and fully rock (Mr. Barre is simply great here) and finally drawing all the baroque'n'roll style and the flute features we love. 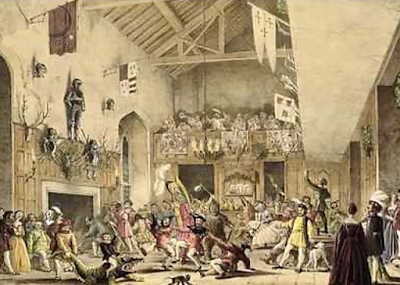 An edited version of this painting, "Twelfth Night Revels in the Great Hall,
Haddon Hall, Derbyshire", by Joseph Nash (1838) was adopted for the cover art.
This dynamic profile and the manifold structure of the track are especially admirable in the album version, lasting more than 8 minutes. Useless to say, the minstrel of the song was going to get the alter ego of Ian Anderson since the first live performance of the track... for sure, my favourite mistrel ever!
Pubblicato da Domenico D'Alessandro a 12:47