Set The Controls for The Heart of The Sun (Pink Floyd, 1968)

More than a song, this is an inner listening experience. "Set The Controls for The Heart of The Sun" comes from Pink Floyd's second album, "A Saucerful of Secrets", and it was written by Roger Waters. The original 5:28 minutes track was usually expanded in live shows, and maybe the most known of those reworked versions is to be found in "Live at Pompeii" film and this one exceeds 10 minutes of length. It's a mysterious, exotic, hypnotic trip into another world and, IMHO, it features some of the most fascinating drummings by Nick Mason. I won't bother you with labels such as space-rock, psychedelia or proto-prog... choose yourself, for what it's worth. 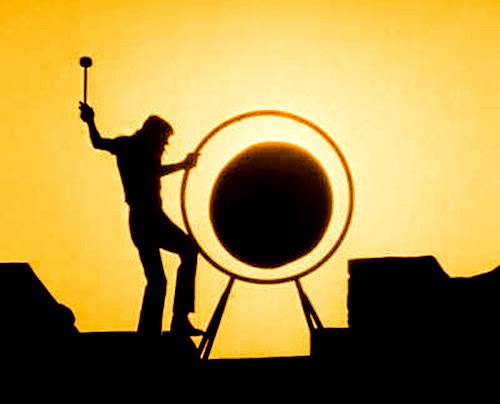 I'm sure you all remember this frame.
I couldn't forget it even if I wanted, as I live in front of Pompeii amphitheatre.


The lyrics aren't exactly simple, and they allegedly include some lines translated form Chinese poems. I don't think words are employed here in their usual meanings, it's better to take them for their sound and their evocative strength, strictly linked to the music. Anyway, the suggestion coming from this track is as powerful today as it was in the early '70s, when the band usually included it in their live sets. A last word about that Gilmour's interview in 2006, in which he said there were in this song both his and Barrett's guitars. Well, if it's true, this adds an historical value to "Set The Controls", but its magic is something you couldn't improve further.
Pubblicato da Domenico D'Alessandro a 11:17