This was the first PFM's single, released in 1971, some months before their first album with "La Carrozza di Hans" on the B side. Please note that the album version of this song is a re-recorded and longer version, and also the most known one on  the Italian market. "The World Became The World" is the English version of "Impressioni di Settembre" (meaning "September Impressions") and was released as the title track of their 1974 album conceived for the International market and featuring Pete Sinfield's lyrics. 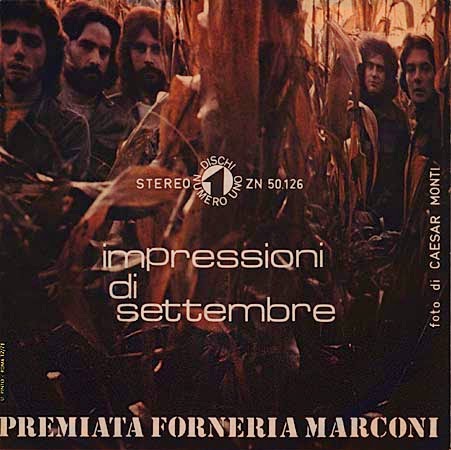 That said, the song is a little prog pearl, sweet and sensitive, but also innovative in its structure, including two different themes and some instrumental passages, arranged in a balanced way with some differences depending on the version you're listening to. Both the Italian and the English lyrics are based on the influence of season changes on human soul and emphasize the wet side of autumn (it's dew in Italian lyrics and rain in Sinfield's ones). Perhaps that's why the music itself has a liquid nature and the song flows like a fresh and sparkling stream out of the prog forest.
Pubblicato da Domenico D'Alessandro a 11:18