This formidable 11 minute track is from "A Farewell to Kings", released by Rush in 1977. It desplays all you're expecting in a Rush song: power, sudden tempo changes, lush guitars, beating bass, plenty of percussions. I could roughly divide "Xanadu" in three parts, the first one being a 5 minute instrumental section - almost a track by itself - in which all the main riffs and themes are presented or sketched and many changes occur in tempo, instrumentation and mood. You'll find here atmospheric moments and also epic tunes, acoustic sounds along with electronic experimentations: this song introduced synths in Rush music, anticipating the band's further evolution. 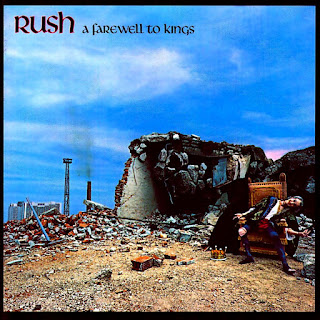 One of the best Rush albums...
...and one of their strangest covers.
Then the sung segment comes in, with a very passionate Geddy Lee's performance, also graced by short and effective epic walls of sound. The last part begins with a long and beautiful electric guitar solo and ends up with a weird, slow tempo finale. I won't forget the lyrics - written by Neil Peart - inspired by Coleridge's opium influenced poem Kubla Khan, describing Xanadu, the summer palace of the famous Mongol king Kublai Khan. The band try to depict in words and music this fanciful place, in the wake of Romantic era symphonic poems, an attempt that will return in their following records. There's a bit of everything in this track, but even so you'll find an inner coherence and an original sound in it... in short, you'll find Rush in it.
Pubblicato da Domenico D'Alessandro a 17:20