When I hear someone saying it's impossible to write and perform a prog song lasting less than five or six minutes I immediatly think of this excellent song by Cressida, a group that only released two albums and never got the attention they deserved. In 3'38" this proto-prog fivesome did and gave everything: a catchy melody including verse and chorus, two different instrumental passages, a guitar solo, a piano solo, a hammond organ intro, a very good vocal performance and all the inspiration sources you need, from classical to jazz music. 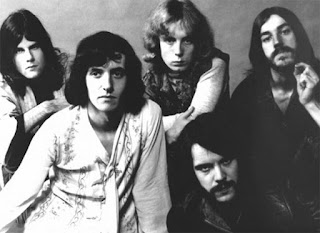 
To say the truth, all the first Cressida album is a treat, but if I had to suggest one single song from it as a taster, well, I'd say "One of A Group". This is not only for the above listed reasons, but especially for another capital point: that is invention. Yes, there is invention in this song, a creative strenght I rarely observed elsewhere, an optimism that perfectly represents the beginning of an era.
Pubblicato da Domenico D'Alessandro a 23:10