I can read your minds: "How comes you present this track with all the PF's masterpieces to write about?" Well, I'm sorry but it happens I like this song very much, I think it's one of the best in Gilmour/Mason's era of the band, an atmospheric, intense, touching piece of art, IMHO. First of all, the music is perfecty Pink Floyd-esque, a rarefied ballad gliding on Rick Wright's keyboards and leading to a long, beautiful guitar solo. 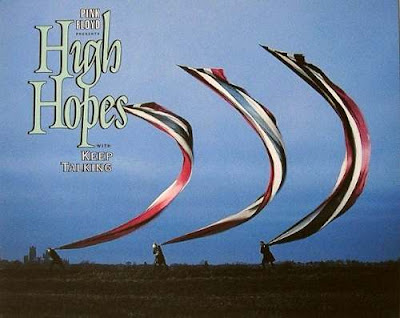 
And then, the nostalgic lyrics dealing with the end of Youth and its belonging to a peer group perfectly fit in the slow and airy Gilmour's music. One could regret Roger Water's creativity on "The Division Bell" album, but songs like this one remind us how good Gilmour is in writing and performing - with his two old friends - unforgettable tracks, that's why so many of us are waiting for more. Unfortunately, Rick Wright will never come back, claimed by the bell.
Pubblicato da Domenico D'Alessandro a 09:57