This is taken from the First Act of "The Final Experiment", the first rock opera credited to the label-band "Ayreon", created by Dutch guitarist and multi-instrumentalist Arjen Anthony Lucassen. It's a bombastic, flushing suite divided in six parts, lasting some 12 minutes and developing a turning point of the intricate sci-f and medieval album concept. If the first half of "The Banishment" is a good example of rock opera, including two good lead singers and a choir, the second one is definitely prog. 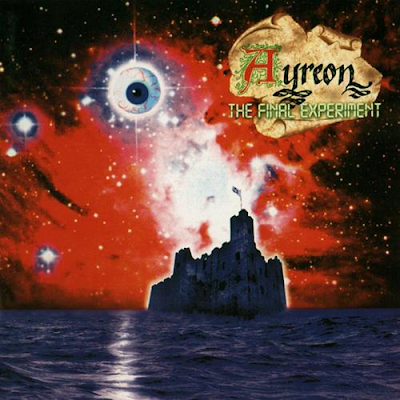 
And what a boiling, intricate, up-tempo prog it is. Keyboards and guitars duel while the rythm section accelerates the tempo and underlines the dramatic mood of the lyrics, telling the main character Ayreon's trial and condemnation by a crowd of enraged villagers. There's a strong pathos in this song and a highly dynamic architecture, leading the listener through different emotions and musical worlds. Colourful and lively, but never too noisy, this is one of the best Lucassen's achievements. IMHO.
Pubblicato da Domenico D'Alessandro a 12:36

Email ThisBlogThis!Share to TwitterShare to FacebookShare to Pinterest
Etichette: 1995, 90s, Ayreon, The Netherlands