There are two different versions of this Galahad's beautiful epic. The first one comes from the very early years of the band and was included in their first self produced tape, titled "Studio 95 Demo" and released in 1985, while the second one was re-recorded for the first Galahad's proper album "In A Moment of Madness" re-issue of 1993 and re-titled "In A Moment of Complete Madness". This more recent version is surely far better in sound quality than the original one. Anyway, if you want to listen to the historical recording, you can dowload it via the band's official website. 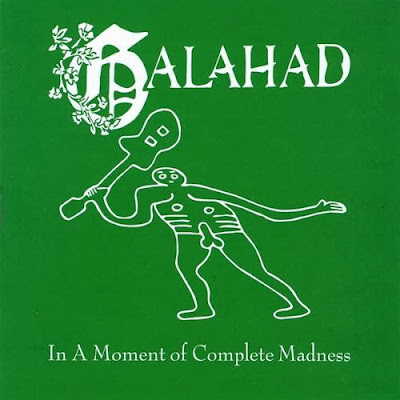 This is the cover art of the 1993 re-issue of the first Galahad's album.
Here they included three bonus tracks, including a new version of our song.

This song is about an impossible love story involving the British singer and a French ghost and despite the unavoidable debuting naiveties, really is a lovely, mysterious and nocturnal song I still listen to with great pleasure. It begins with a lunar melody, very well sung by Stuart Nicholson, and goes on mid-tempo until the halfway scary instrumental section, including a French / English bilingual message to the female ghost and a pipe organ. The ending section is also very good, with a dreaming electric guitar and a rising tempo underlined by a martial drumming. I can't say I like all Galahad's discography, but this track is one of my favourite essays of the '80s neo-prog era.
Pubblicato da Domenico D'Alessandro a 13:23