There's more good in Argentina you can imagine, old and new prog, I mean. This track, for example, is the opening one of Espiritu's first album, "Crisálida", released in 1975. The song begins with a long, atmospheric, almost spacey keyoard intro, then a devilish electric guitar comes in and the tempo jumps up. Soon after, here's the sung section (in Spanih), accompanied by acoustic guitars and some piano effects. 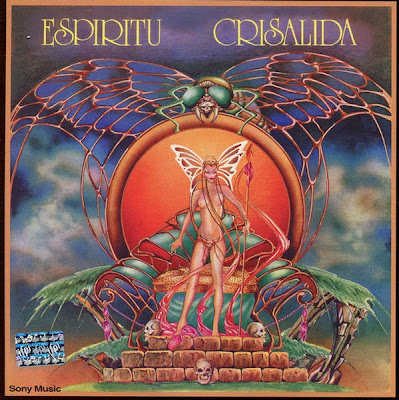 This cover reminds me of some American SF magazines of old.


It's a lively ballad with a 2 minutes central instrumental interlude including good guitar / keyboard interplays and a choral touch. There's a strong taste of the '70s in "La casa de la mente" (meaning "Mind's Home"), but the sound is rather original, close maybe to some Italian bands like PFM, but with its own distincive feel. I recommend this song to anyone liking rich, diversified and well balanced compositions. Like me.
Pubblicato da Domenico D'Alessandro a 13:59