This mostly instrumental track surely is one of the trade marks of Pink Floyd and features one of the most enthralling (double) bass lines ever. It was the opening song of the album "Meddle" and the only lyrics in it are the menacing One of these days I'm going to cut you into little pieces, spoken by Nick Mason and allegedly addressed to a BBC's DJ the band didn't appreciate so much. The music seems like a rising wave, full of tension and running over the listener by gusts. 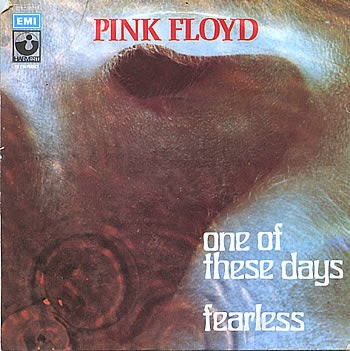 The single was released in November 1971, b/w "Fearless".


The echoed double bass played by Waters and Gilmour is the most noticeable element of the song, but not the only one, as the whole band contibutes to its striking effect and especially Nick Mason with his usual creative drumming. The track also includes a series of effects and assorted oddities, like the opening wind, Mason's distorted voice or the Doctor Who's TV series theme quotation by Gilmour's guitar. For sure, "One of These Days" is a highly influential song, a real rock evergreen.
Pubblicato da Domenico D'Alessandro a 10:46