This song amazes me. It comes from the album "Moving Pictures", released in 1981, and it's somewhere in between prog rock and mainstream rock. Somewhere doesn't mean a steady point, because this track is in perpetual change. From traditional rock measures to keyboard progressions, from a guitar solo to an electronic insertion, from Neil Peart's stunning drums (from 4/4 to 7/8, and even to 13/16 !) to Geddy Lee's double sided vocal performance. 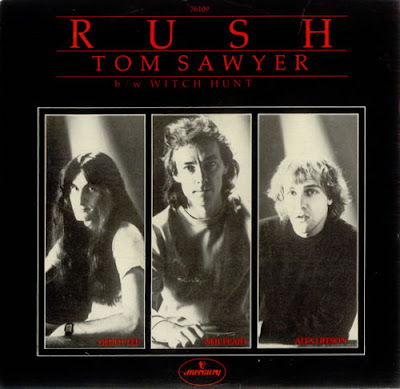 "Tom Sawyer" was also released as a 7" single. This one.


As usual for them, Rush expand the real time and when you read this song only lasts 4:43 minutes you wonder how on earth they could put so many things in such a short duration. Well, they could. It's interesting to know that the lyrics for this song are a Lifeson's re-writing of the poem "Louis the Lawyer" by the Canadian lyricist Pye Dubois. They're about freedom and indepencence, that's why the titled changed in "Tom Sawyer" recalling the young hero from Mark Twain's book. A good song with a ton of good ideas in it, as you can see.
Pubblicato da Domenico D'Alessandro a 15:09