The Fountain of Salmacis (Genesis, 1971)

The Genesis' musical version of the Greek myth of Salmacis the Nymph and the young Hermaphroditus is a progressive rock classic. Nonetheless, this track and its whole album, "Nursery Cryme" were almost ignored in 1971, their release year. It doesn't matter today, of course. The first verse of the song immediatly striked me when I first listened to it: a deep, intense vocal performance coming out from a misty and arcane intrumental intro, then an emotional crescendo and an unpredictable series of changes. 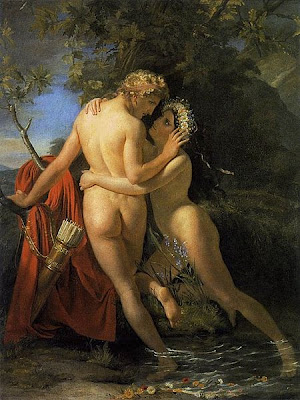 
I really was in Wonderland! But the most unusual thing about this song is that its magic never fades out for me: each time it's the same adventure in a musical magical world, each time Peter Gabriel sings From a dense forest of tall dark pinewood, Mount Ida rises like an island... and Phil Collins gently touches his cymbals I see the path leading to Salmacis' fountain and I breathe the moist air of Crete mountains. And I'm happy as only a child can be.
Pubblicato da Domenico D'Alessandro a 14:47