One of the most known and appreciated songs by Dream Theater, no doubt, nonetheless not one of their typical prog metal ones. This is an excellent ballad, taken from "Metropolis Part 2: Scenes from A Memory", the concept album developing the plot of a song , "Metropolis Part. 1: The Miracle and the Sleeper", included in "Images and Words" album. I like this track for its good and relaxed melody, and also for its pleasant Western American influence. As I said, this song is part of a concept, so the lyrics deserve some explanations: the main character, Nicholas, discovers he was a woman in its previous life and here he finds out he (or she, more exactly) was innocently killed and sees all this trhough her eyes. 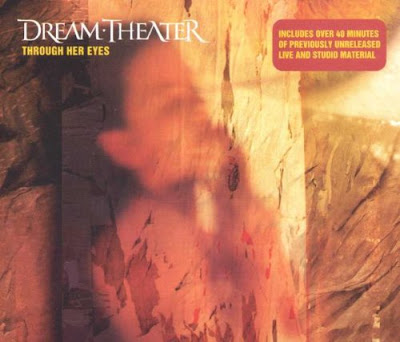 This beautiful song was also released as a CD single.
The sadness of this story is perfectly represented in the dreamy and almost suspended mood of the track, and most of all in James LaBrie vocal performance, apparently plain but so sensitive and sorrowful, one of his best ones, IMHO. "Through Her Eyes" proves that this band can give strong emotions to the listener even with no technical virtuosities and no intricate arrangements. That's when I best like them.
Pubblicato da Domenico D'Alessandro a 13:38