Let me say this: I love BJH, even when they're a little too much sweetish. Anyway, this is not the case: "She Said" is a perfectly balanced song, featuring a hammond-driven proto-prog first part and a pastoral, dreamy second movement, a final reprise of the main theme ending with a very good John Lee's guitar solo. "She Said" is also immune to the orchestral arrangements characterizing many songs of BJH's second LP (and many BJH's albums, actually). 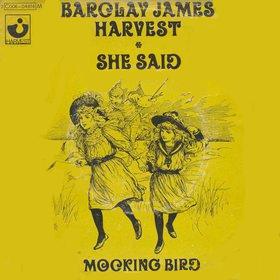 There's also an edited version of this song ,
released as a 7" single, b/w the famous "Mocking Bird".


Really, this is a powerful opening song for "Once Again" and you could even consider this as a mini-suite, being the union of two different songs written by Les Holroyd the band decided to merge and enrich with the instrumental passage and the final solo. Maybe the lyrics aren't as good as the music, but the resulting 8 minute composition is definitely worth your attention, trust me.
Pubblicato da Domenico D'Alessandro a 11:35