Did you ever wonder how Gentle Giant would sound if they were born in the '90s? Well, if you did, Echolyn is the answer. This American band is one of the happy few considering the Shulman brothers' band as a major influence for their music. This doesn't mean they reproduce the original sound of the '70s, on the contrary they have their own trademark, made of good ol' prog, but also of a genuine research in contemporary music field. 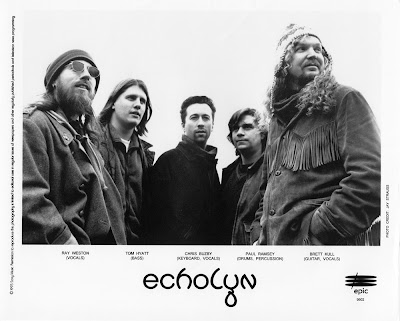 Echolyn in 1995 in a Sony official press photograph.

The title track of their 1995 album - the only one released by a major recording company - is a fine example of this. Complex plots, some instrumental passages and a good vocal harmony lay on a syncopated rythm and the general mood is one of joyful adventure. The lyrics perfectly describe what music means for the band and those lines could be adopted as a manifesto by many other prog musicians. Please, read this:


I'm stretching my ears they're open and not withstanding
To rhythmic syncopation, harmonic dissonance
I move to a groove that will never stop swinging
And I sing to a song that never ends
I'm pushing my brain to think a little harder
To learn from the simple and question the complex
If logic and reason are the gods that you follow
Then you'll drown in your soul's emptiness.
Pubblicato da Domenico D'Alessandro a 12:02