Are Asia a prog band? Old question. For sure, the group's members are what I call prog: not only they come from three of the greatest progressive rock acts of the '70s (Yes, E L & P, King Crimson), but they played an essential role in building and defining this genre and its features. They wanted to find an easier approach with Asia and they succeeded. 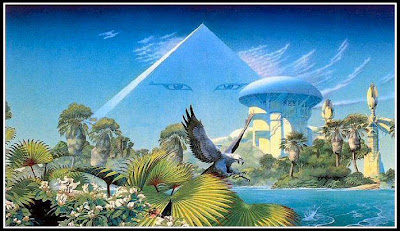 Roger Dean's cover for "Alpha": this, at least, is very prog!


Even so, some of their songs bear the prog rock mark, and it's exactly the case with "Open Your Eyes" and its "arena rock" wall of sound, where tempo changes, instrumental passages, guitar/keyboards dialogues and imaginative arrangements seize the listerer's attention. IMHO, a pearl from Asia's second album "Alpha". OK, there's also a catchy tune... so what? Just try the airy finale and let me know.
Pubblicato da Domenico D'Alessandro a 23:11