In the prehistoric era when there were no Internet nor Youtube providing pre-listening of nearly every music worldwide, I read somewhere with interest of this Japanese band, but it was simply impossible to find one single copy of their only studio album, at least in my country. When I finally got my hands on this CD, I wasn't disappointed at all. It's a fascinating, old style, melodic and sensitive progressive rock, featuring tons of keyboards (mostly mellotron) and 12 string guitars, but also Makoto Kitayama's soft and effective voice, singing Japanese lyrics in a convincing and warm tone. 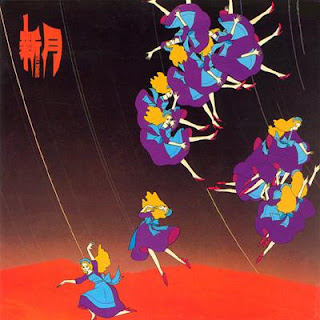 ...and what a beautiful cover!


"Oni" (鬼, meaning "demon") is the 9 minutes opening track of "Shingetsu" album (新月 "New Moon", also the name of the band) and one of the best. There's a sense of opening and unknown worlds in this song and I also appreciate the intricate and delicate instrumental weavings, alternating with calm and suggestive melodies. The early UK prog and the Italian scene certainly influence Shingetsu, but they had their own style. Such a pity they disbanded so soon... well, at least we have this very good record to listen to!
Pubblicato da Domenico D'Alessandro a 08:49