Taken from "The Yes Album", this song has everything - and more - to be considered as an all time prog rock classic. Set up like a suite in three movements (Life Seeker, Disillusion and Würm), the song is inspired by a Robert Heinlein's SF novel published in 1959 that also won the Hugo award. Mainly written by Jon Anderson and Chris Squire, this actually is a collective song, graced by the skills and the ideas of the whole band. The rock background is enthralling, strong, even whimsical, following the band's habits. I daresay the best feature in this track is the ever changing tempo, something we also see in mood and style. 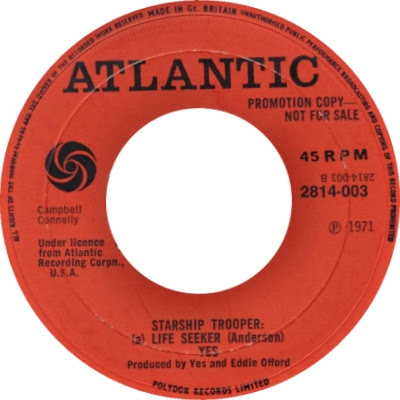 The "Life Seeker" section of this suitealso was released
as the B-side of "I've Seen All Good People" 7" single.

Nonetheless, the listener perceives (well, at least I perceive) kind of a crescendo, leading to the last, bombastic section. I also think this is one of the best examples of interaction between lyrics and music, both concurring to the final, deliciously intricated effect. And in the middle of this whirling sounds, there you are some of the most beautiful and homesick Anderson's lines:

Speak to me of summer, long winters longer than time can remember,
Setting up of other roads, travel on in old accustomed ways.
I still remember the talks by the water, the proud sons and daughters that,
In the knowledge of the land, spoke to me in sweet accustomed ways.
Pubblicato da Domenico D'Alessandro a 09:02