Taken from Ange's second album "Le Cimetière des Arlequins", this rather long title track features almost 9 minutes of excellent music and biting lyrics. The first sung theme is something like a puppet's music and perfectly represents the topic of the track: the anonymous wheel game of human lives transposed in a world of marionettes. Full of surprises, this song is. 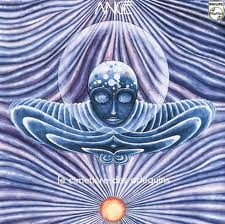 The russian but german-born painter Jacques Wyrs illustrated this cover.


After the puppet's verse, we cross a dramatic chorus, then the first theme comes back and there's the dense, arcane, mostly instrumental second section, featuring a yelled version of the chorus, where Christian Décamps invites the "harlequins" to take their place in the graveyard. A harder riff, also quoting Wagner's Ride of The Valkyries and leading to the final clockwork bruitage shows the miserable crowd's parade towards the final resting place. Strong, that's the word for it.
Pubblicato da Domenico D'Alessandro a 17:35