I've always been fond of this track, recorded during the "Wind & Wuthering" sessions and released some months later in the "Spot The Pigeon" EP. The song is definitely divided into 2 parts.  The first one is a sweet ballad, based on the story of a man wrongly accused of  rape, convict for 20 years, finally declared innocent and released from prison. Some like these lyrics, some dislike them... I have mixed feelings, as I think the idea's good, but the actual words aren't always convincing. For sure, I like the melody and the 12 string guitars, two winning points, IMHO. 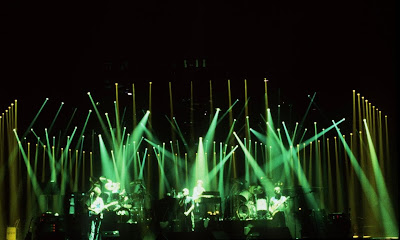 Genesis light show during their 1977 tour.
They also performed "Inside And Out" in a few dates.

The second part is even better, being an instrumental crescendo, based on a 12 strings rhythm guitar and featuring a very good Hackett's electric lead guitar and a rightly famous solo by Tony Banks on syths, well supported by drums and bass. I like the dynamic, enthralling, fully prog architecture of this section. There are some other reasons why Genesis fans often talk over this song: many of them complain its exclusion from "Wind & Wuthering", all of them consider it as Steve Hackett's swan song in Genesis history. What really matters to me is the beauty of this track, one of last true progressive ones from the band. Flowing water and bursting fire,  that's the essence of Genesis sound.
Pubblicato da Domenico D'Alessandro a 10:44