"The Sentinel" was a seminal album in the '80s resurgence of prog rock and this song represents very well the martial, dramatic sound of the band, especially in this sci-fi concept album, their first and most loved one. It is important to say that this song was only released in the 1992 CD version of "The Sentinel", where the band also changed the running order of the tracks, in order to restore the original concept, including the music that didn't find its place in the LP. So, this song isn't a filler, not at all, and that's why I add it here to my collection. 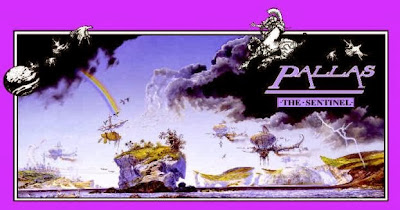 Could a cover art be more progressive than this one?


The massive presence of old and new keyboards provided by Ronnie Brown, a very good Niall Mathewson's guitar solo, Euan Lowson's almost desperate and always theatrical vocals are some of the features of this 8 minutes epic and mostly slow tempo song. The mood changes are stunning, leading away the listener through war and peace, silence and noise, pleasure and pain. The melodies are well written and the rythm section supports each turn providing creative and intricate rythms, while the keys hold up the vocals properly stressing their emotional peaks. That's exactly what I like in a progressive rock song.
Pubblicato da Domenico D'Alessandro a 12:50