This '90s French band were able to release four studio albums and this epic is the title track of their second work. In the wake of '70s groups like Ange and especially Mona Lisa ( a bandin whose reformation they were involved in the year 2000), Versailles produced a highly dynamic and dramatic prog rock, influenced by neo-prog bands, but also featuring strong roots in the symphonic rock era. "Don Giovanni" is one of their best achievements, with its unpredictable tempo changes, its rich range of sounds and effects and its classic reference. 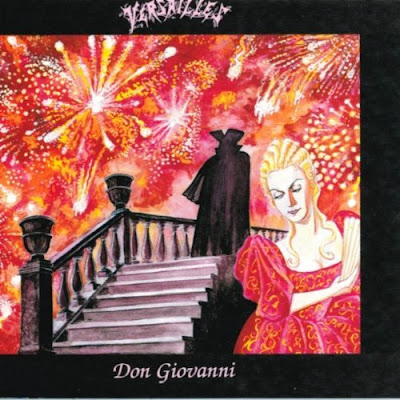 Varsailles released 4 albums between 1991 and 1998.
During more than 15 minutes, you'll appreciate the strong, emphatic and also sensitive Guillaume de la Pilière's vocals, the clever mix of his vintage and updated keys and - last but not least - his splendid piano work. The rythm section is also very good here, following the leader's incessant tempo and mood changes, a real tour-de-force putting more flesh and soul in this track. In short, a lively and colourful song, a blooming bouquet of musical flowers.
Pubblicato da Domenico D'Alessandro a 11:26