How could I forget this song? It's a 10 minutes song divided in four parts, each one bearing its own title and introducing a new theme, so that we can consider it as a short suite. Its acoustic intro show the listener inside a musical Wonderland made of sounds and colours, with the ineffable guide of Jon Anderson's voice, singing like an angel three different tunes until Rick Wakeman comes in and opens the sky. It's like diving in liquid music and the adventure goes on with Jon Anderson doubling the keys and closing the first section. 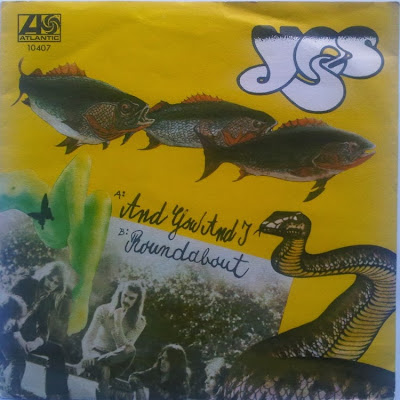 The single version of "And You And I" only features the second
section of the song, titled "Eclipse". Another US single version
included instead the whole song split in two parts.


Then, Steve Howe's guitar restarts the song and we're one more time in a ballad mood, rapidly evolving in more complicated forms, thanks to the rythm section and some more keyboard effects. So a choral theme rises up and the last word is for Jon Anderson. It's always surprising to me how this song can be both simple and intricated, a kind of balance and freshness Yes won't often achieve.
Pubblicato da Domenico D'Alessandro a 23:01