This Ange's song is a very sweet and apparently plain one, but also one of my favourites ever. It was nspired by popular legends about fairies, as narrated by Émile Jacotey, the old peasant providing the concept for the fourth album of the band. He tells the wanderings in the Woods he and his childhood friends used to organize in order to see the fairies and in fact the song title means "In the wake of the fairies". 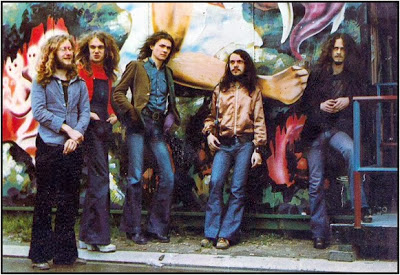 
So, the strong folk taste of the music and the childhood's nostalgic mood give to this track a special, magic atmosphere, a softness of its own I like very much. That's not all: the fusion of rock and acoustic instruments is also a winning point, just take the delicate and neat rythm section's work. Last but not least, the melody itself is excellent and Christian Décamps sings it with his usual passion, especially the chorus, one of his emotional peaks. IMHO.
Pubblicato da Domenico D'Alessandro a 10:04