This is the quintessential rock (or prog rock) ballad in my very humble opinion. Cleverly arranged, it keeps an apparent simplicity on which David Gilmour's tight voice sings those beautiful lyrics about Syd Barrett, the ex member of the band to whom most of the "Wish You Were Here" album is dedicated. This song is so well known that I can skip all punctual descriptions, but I want to point out some of its features I especially like. 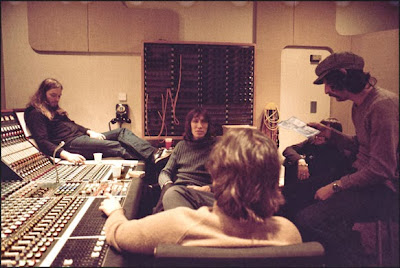 The band during the "Wish You Were Here" studio sessions.


The intro is one of them. The tuning radio including a glimpse of Tchaykovsky's fourth Symphony and introducing a station performing GIlmour's twelve-string guitar intro is stunning. And when the guitarist overdubs the radio intro with an acoustic guitar, the effect is not only pleasant, but also moving. The melody itself is wide, enjoyable but never too catchy, so that you can't help but sing along. Gilmour's solos and the suggestive lyrics complete the picture of this real masterpiece I can't listen to without a shiver down my spine.
Pubblicato da Domenico D'Alessandro a 10:33