This is one of the finest songs from "Afraid of Sunlight", the last Marillion album for a major company, released in 1995. All the tracks in this CD are about celebrity and its risks and this one, in particular, was inspired by Donald Campbell's life. This british speed record breaker got both land and water records and died in 1967 while attempting another record on water with his Bluebird B7 vehicle. One could imagine a fast song for such a speed lover. Well, no, this is a down tempo track, a sad, profound and touching meditation on life and love mysteries, including kind of a last message from Campbell to his wife. 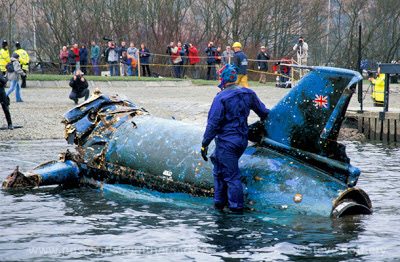 The recovery of the Bluebird wreck in 2001.
A photograph by Steve Rothery.
This musical trip is guided by a spectacular H's vocal performance and three beautiful, nostalgic themes. Being a prog song, some very good and dreamy instrumental passages enrich the song and when it's over... you'd like some more. And also the story of this song deserves some more information: after the fatal crash, Campbell's body wasn't found in the depth of Coniston Water, UK, and in the year 2000 Bill Smith, a diver inspired by this song ,decided to try and found both the body and the wreck. Those were recovered between May and September 2001 and Campbell was buried in Coniston. His funeral was attempted by his family and Mr. H who sang... guess which song?
Pubblicato da Domenico D'Alessandro a 17:30