The Dutch band Focus released many good songs, some of which are very intricate and serious ones. But when they add their trademark pinch of humour they definitely win. This is the case with the instrumental track "Hocus Pocus", maybe their best known song, taken from "Moving Waves" album. There's almost averything in there: a catchy guitar riff, a disney-like magic atmosphere, vocal harmonies, some flute à la Jethro Tull, a medieval scent, guitar vs keyboards battles, even a good imitation of an Alpine yodl. 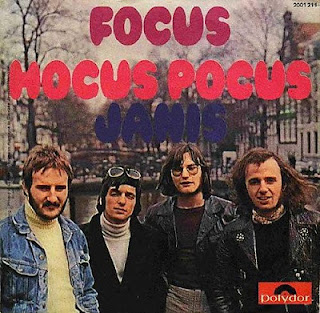 Hocus Pocus was also released as a single.


It's a funny and intriguing track you can't help listening till the end end enjoying it each time a little more. The engaging rythm of "Hocus Pocus" is specially suitable for live performances, that's why this song was and still is a favourite in concert. It's a living proof that prog can be a joyful music.
Pubblicato da Domenico D'Alessandro a 12:24

Email ThisBlogThis!Share to TwitterShare to FacebookShare to Pinterest
Etichette: 1972, 70s, Focus, The Netherlands