For the date of its release, the influence it had and the musical impact still strong after so many years, "Bourée" has a place in the inner circle of essential prog tracks. As anyone knows, this is a Ian Anderson loose arrangement of a Johan Sebastian Bach's composition, namely a "bourrée" (a kind of dance, correctly written with a double "r") being the fifth movement of a longer suite, numbered BWV 996 in the German composer's catalogue. Anderson chose this track for the album "Stand up", improved the rythm and added folk, jazz and rock elements to the track, giving one of the first examples of his explosive style in less than 4 minutes. 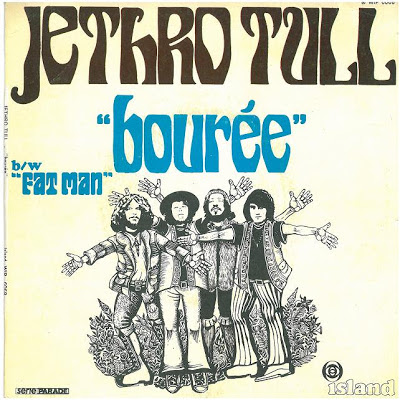 
The first part of Jethro Tull's "Bourée" is an observant performance of Bach's theme, with the flute replacing the original lute. The central section is an apparently free improvisation on this theme, abandoning any classical measure with a strong jazzy approach. The final part resumes J.B. Bach's sheet music with two Anderson's overdubbed flutes. The group recorded many live versions of this anthemic song (a very long and good one is in "A Little Light Music", released in 1992) and also an alternative studio version in the "Jethro Tull's Christmas Album" (2003). Of course, the original "Stand up" version features in all the band's compilations. It's an amazing track, a very strong one, with an enthralling rythm and the wild flute performance that made a legend of Mr. Ian Anderson.
Pubblicato da Domenico D'Alessandro a 23:30