The 9 minute title-track of Ange's album of 1974 is one of their finest moments, IMHO. The first part of the song is wrapped in a Middle Ages atmosphere and dominated by Christian Décamps' theatrical voice, the second section is a long and beautiful Jean-Michel Brézovar's guitar solo over a powerful background, maybe reminiscent of early King Crimson's work, driven by the keys, with the rythm section helping to build up an effective wall of sound. 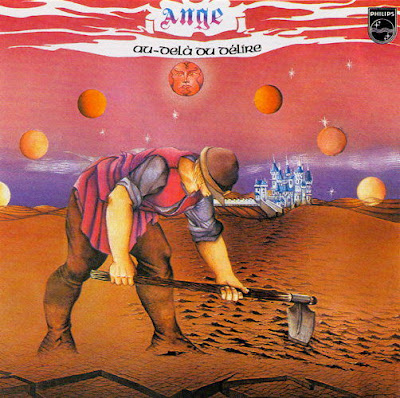 
The song is the final installment of a concept relating the incredible story of a poor peasant living in the 14th century. This man organizes a rebellion against his feudal lord, then is captured and killed, but his astral body survives and he comes back to Earth after mankind's destruction and restarts History. "Au-delà du délire" ("Beyond Delirium") is a well composed and arranged track that still charms me with its old fashioned sounds, naive lyrics and brilliant musical stunts. A trip in a far, enchanted contry.
Pubblicato da Domenico D'Alessandro a 10:38