This is the first track from Depois do fim, the only album released by the original line-up of the Brazilian band Bacamarte. One of the hidden treasures of prog rock. Listen to this instrumental intro and you'll find a bit of everything: classical music, South-American folk, Italian prog, Spanish guitars, ambient passages, Genesislike and Floydlike moments... well just name it! That said, the track is not a mere compilation of favourite prog styles, there is a strong and original temper, sweet but not sweetish, pleasant but not trivial. 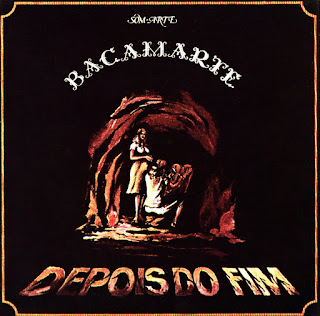 A dark cover for a bright music.
﻿
Please don't forget the rest of the album, where you'll also listen to Jane Duboc's beautiful voice. One more thing: even if this music is so sweet, the topic is not: Depois do fim ("After the End") is about the end of the world and the day after. The typical scent of '70s is not strange: released in 1983, this album was actually recorded by the band in the late '70s, then abandoned and rediscovered five years later. Luckily, I daresay.
Pubblicato da Domenico D'Alessandro a 17:05