Roberto Rizzi amazes us once again with a particularly complex prog pearl. Thank you, Roberto!

A very strange group. Daevid Allen, after his experience with Wilde Flowers/Soft Machine, decided to form a band with his girlfriend Gilli Smyth (who was teaching at Sorbona University!). Gong is a planet, from where pixies, with the head like a teapot, communicate with earth. But "Tried So Hard" doesn't talk about this story; this tune appeared in "Camembert Electrique", the album which anticipated some aspects of the soon to come Gong mythology. So this song is played in Gong's perfect style. 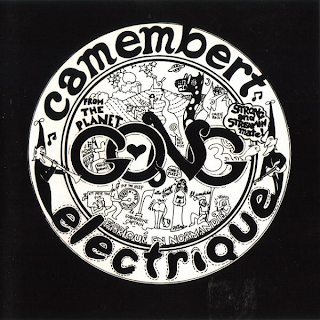 
The beginning is very kind, with a gently guitar. Then, a volume increase announces that some different and stronger  riffs are coming. In fact, Gong's albums have the peculiarity of having an incredible range of guitar, vocal and other instrument riffs. "Tried So Hard" isn't an exception. After this powerful section, Gilli Smith begins to sing with his ethereal voice and the band plays very very softly. And then, another volume increase, the powerful section starts once more, untilthe gently guitar riff of the beginning comes back to close the track.I like this song, because his structure reflects what Gong were, but, at the same time, this tune is very serious and it doesn't contain too many oddities, of which Gong were often great masters.
Roberto Rizzi﻿
Pubblicato da Domenico D'Alessandro a 12:15